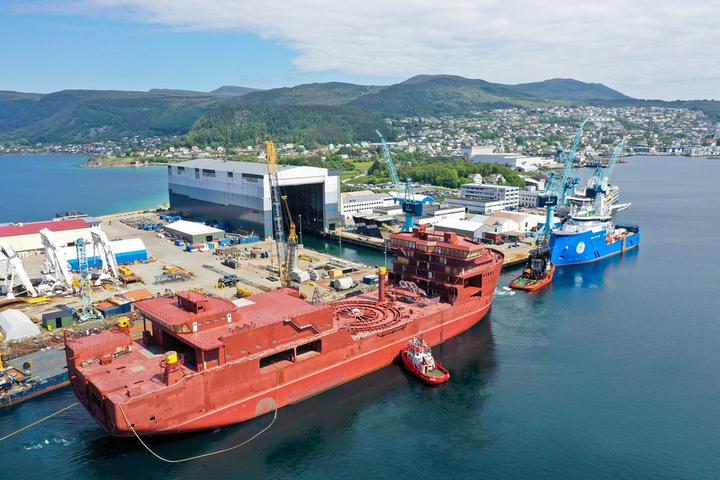 Nexans continues to book assignments for its new multi-purpose cable-lay vessel Nexans Aurora, currently undergoing outfitting and completion at Ulstein Verft in Norway, after hull construction at the Crist shipyard in Gdynia, Poland. The vessel is due to be delivered and operational by mid-2021. Planned installations in its early years include the power umbilicals for Norske Shell’s Ormen Lange gas field subsea compression project in the Norwegian Sea; a new phase of development at Saudi Aramco’s Marjan field offshore Saudi Arabia; and the HV export cables for the giant Seagreen 1 offshore wind farm in eastern Scotland.

The Aurora, with a length of nearly 150 m (492 ft), a beam of 31 m (102 ft) and a deadweight of 17,000 metric tons (18,739 tons) will be Nexans’ largest and most versatile construction ship, capable of laying all types of subsea power cables and umbilicals, including bundles, in harsh shallow-water and deep subsea conditions. It will also be outfitted to perform cable jointing, repair, cable system protection and trenching.

This is a new bespoke cable installation vessel design based on more than 40 years of experience operating the CS Skagerrak in worldwide cable installation operations. But compared with the Skagerrak, which underwent a comprehensive refurbishment in 2010 (following the acquisition from previous owner Bourbon), the Aurora will have a much greater carrying capacity, a higher transit speed (typically 12 knots), and more bunk space, accommodating up to 90 people in single cabins. Skipsteknisk in Ålesund developed the ST-297 design for the DNV GL-classed vessel, also drawing on the combined experience of Nexans, Ulstein Verft, and UK-based cable/flex-lay equipment designer MAATS Tech.

The Aurora’s stand-out feature, and its main advantage compared with other DP-3 vessels, will be its high-capacity cable-handling spread, comprising a 10,000-metric ton (11,023-ton) split turntable with dual product lay lines and capable of loading out, transporting and installing long lengths anywhere in the world, with a cable-lay speed of up to 20 m/min (65.6 ft). In addition, a vertical lay spread can be fitted for special-purpose installation work. One laying line incorporates caterpillar tensioners for handling bundles, with a high-capacity cable capstan also available for deepwater installations.

Other innovations include the bridge over the enclosed stern work deck and the ROV hangar facing backwards, providing direct work access for the ROV. “This will be especially important in shallow and very deep locations,” said a Nexans spokesman. “In shallow locations, the vehicle will not have to move past the thrusters ‘to get to work’ (cable laying is over the stern), whereas in deepwaters, we start from the end of the ship and move toward touchdown.”

The Aurora will also have a passive roll damping system, a hull shape designed to reduce the vessel’s motions while in dynamic positioning mode, a fully redundant DP-3 system, a high propulsion capability provided via six thrusters, and total power generation capacity of more than 20 MW. The diesel generators will be able to run on low-sulfur fuel; other environmental innovations include regeneration of cable-lay braking power and use of power from shore during cable loading operations. Another feature is the inclusion of enclosed work stations, allowing operatives to perform their tasks shielded from adverse weather conditions.

The vessel’s capacity means it will be able to undertake long-range and long-duration operations without the need to pause for re-supply. Onboard facilities should ensure a high level of independence and reduced need for local support during projects in regions with minimal infrastructure. In general, the level of safety and redundancy built into the design and equipment should guarantee high uptime, Nexans says, regardless of the area of operation, while the flexible design features should allow for easy adaptation to future needs in the offshore and renewable energy sectors.